The zirconia analyzer is suitable for Oxygen measurements from ppm up to % levels in a flue gas or other inert gas (free from combustibles).

The zirconia cell is a high temperature ceramic sensor. It is an electrochemical galvanic cell comprising of two electrically conducting, chemically inert. A zirconia cell, is a kind of solid electrolyte, it is coated on the outside (measuring electrode) and inside (reference electrode) with a thin porous layer of metal, generally platinum. At temperatures above 600°C, zirconium oxide becomes an Oxygen ion conductor, which generates an EMF between the platinum electrodes. This EMF depends on the difference between the partial pressure of oxygen in the sample gas and the Oxygen in the reference gas (using ambient air with 20.94% Oxygen).

ADVANTAGES OF THE ZIRCONIUM OXIDE PROBE

Nernst voltage: Two different ion concentrations on either side of an electrolyte generate an electrical potential known as the Nernst voltage. The larger the difference in the ion concentration ratio, the greater the voltage. Zirconium dioxide At high temperatures >600°C zirconium dioxide (ZrO2) exhibits two mechanisms: Where: E is the potential difference (volts) R is the gas constant (8.314 J mol-1 K-1) T is the absolute temperature (K) F is the Faraday constant (96484 coulomb mol-1) P1 & P2 are the partial pressures of the oxygen on either side of the zirconia tube The Nernst equation can therefore be reduced to: The sensor output voltage in mV is amplified and processed by the analyzer electronics.

If the cell communicates with the surrounding air on both sides, the sensor output signal is 0 mV. 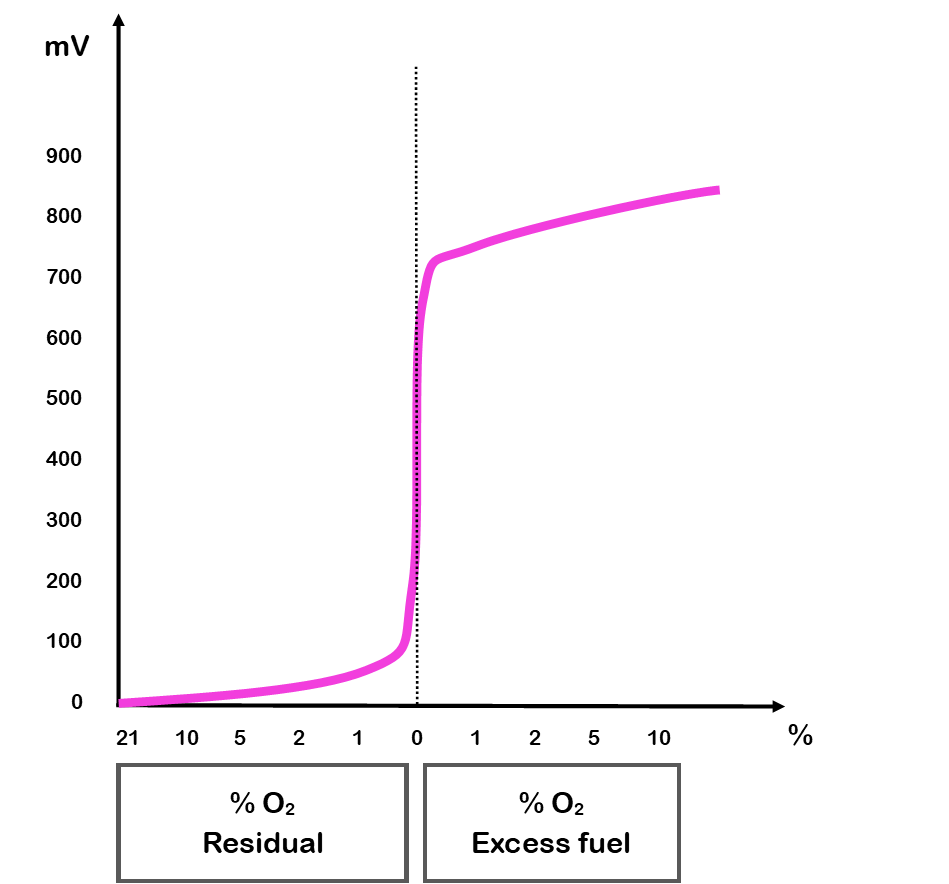 The image shows the trend of the signal produced by the sensor with changing Oxygen concentrations.

As a rule, in the combustion gases of ovens and boilers, due to incomplete combustion of fuel and air, oxygen and residual combustible components are simultaneously present. In this case, due to the high temperature, the residual combustible components are oxidized by the oxygen contained in the combustion gases on the surface of the zirconium cell. Zirconia-based analyzers measure net oxygen, i.e. the concentration of oxygen remaining after the combustion of the fuel in the oven and the oxidation of the combustible components on the surface of the heated cell. Other analyzers measure gross oxygen, only the concentration of oxygen remaining after burning in the oven. Typically, the difference between the net and gross values ​​is small, the concentration of combustible components is in the ppm range and oxygen is in the percentage range. However, situations are sometimes possible in which this difference becomes significant. The differences may also arise from the fact that the zirconium oxide cell measures oxygen using a wet base, when the analyzed waste gas contains water vapor. All other measurement methods require cooling and drying of the sample and therefore operate on a dry basis. The difference between dry and wet measurements can be up to 0.5% by volume. O2, since the concentration of water vapor in the combustion gas can be high. Both measurement methods (wet or dry) are standard.

The figure below shows a schematic of the zirconia cell produced by Adev srl and also used in OxyPink. Molecular oxygen is ionized at the porous platinum electrodes.